Since Gazebo 11 will be the last major version I thought Iâd test the replacement Ignition. Thereâs a handy comparison chart with feature comparisons between the two programs.

But how does it actually perform?

The following tests compare the output of Gazebo 11 and Ignition Citadel.

The salient differences between the two simulators are as follows:

*By default, Ignition supports OGRE2, this is incompatible with my system, so Iâve opted for OGRE visualizations

Inertia is an important element in simulation, as it lets the physics simulator calculate the correct dynamics of an object in simulation.

From left to right: cube, solid sphere, hollow sphere, solid cylinder, hollow cylinder. All shapes have the same mass and are modeled with high friction. The high friction causes the cube to stay in place, while the other shapes are able to roll down the ramp as expected.

Nothing surprising here! Both Ignition and Gazebo calculate the dynamics of inertia correctly.

The only noticeable difference is the rendering. The Gazebo version looks much darker even though all lighting properties are the same, and the shapes arenât showing any shadowing on the ground plane like they are in Ignition. 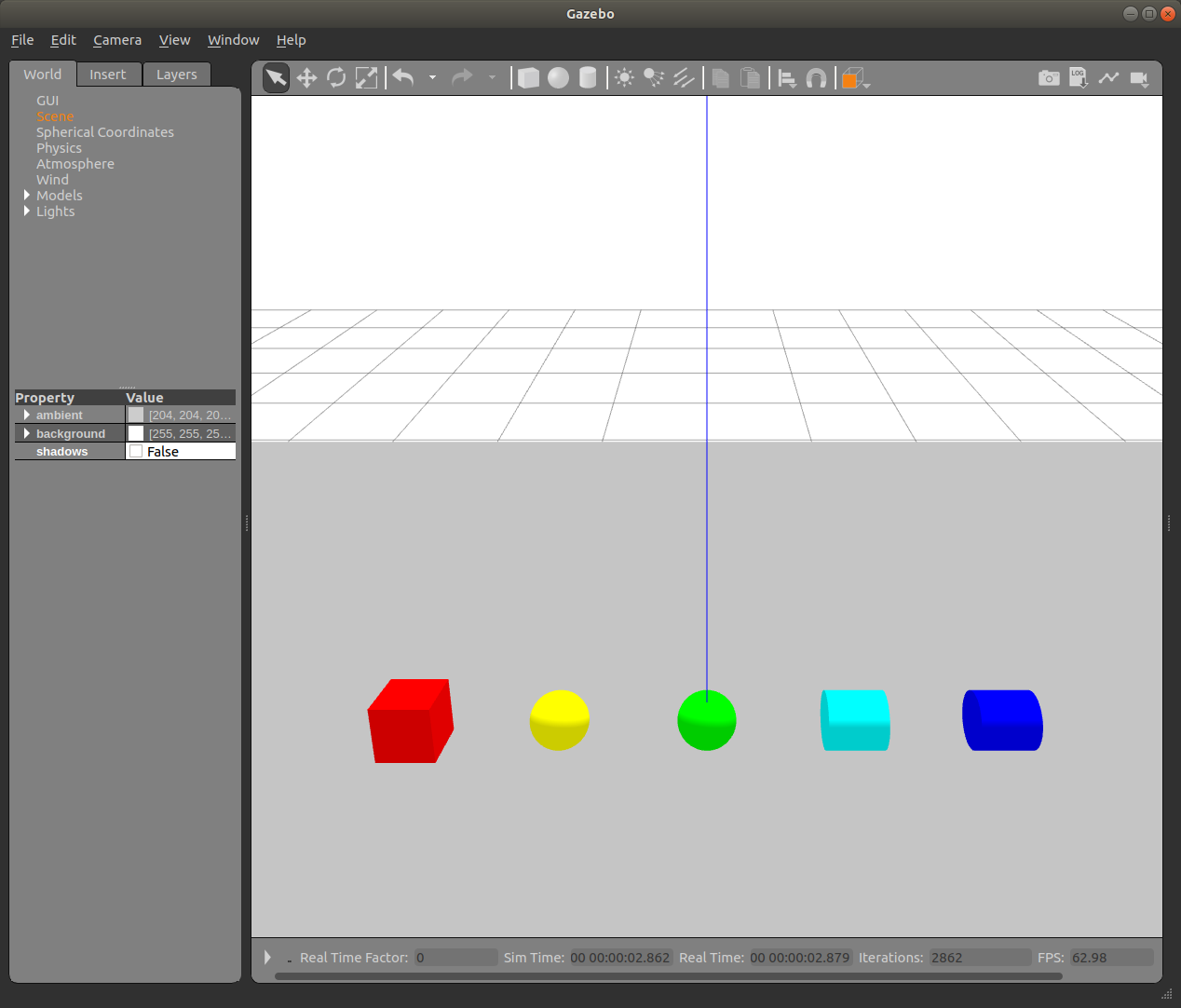 Friction is the first place that shows the most significant difference between Gazebo and Ignitionâs default physics engines.

Most notably, neither simulation performed exactly as I thought it would. In the following tests, boxes I expected to move down the ramp are colored green, while boxes that I expect to remain stationary are colored red.

From left to right:

Cube1: Default friction. sdformat states that if no friction is set, mu1 and mu2 are set to 1 (high friction). Therefore, this cube shouldnât move.

Cube2: mu=1, mu2=0. The ramp is pointed down the X axis. Therefore, I expect that with a high mu along that axis, the cube will not move

Cube3: mu=0, mu2=1. The ramp is pointed down the X axis. Therefore, I expect that with no friction along this direction, the cube will move down the ramp.

Cube7: Cube4, rotated along the Y axis Since the mu value is rotated to be perpendicular to the ramp, I expect the block to move.

Cube8: mu=1 rotated along the X axis. Since only setting mu should set both values, rotation shouldnât matter and the block shouldnât move.

Cube9: mu=1 rotated along the X and Y axis. Since only setting mu should set both values, rotation shouldnât matter and the block shouldnât move.

Whatâs neat is that the cubes 6 and 7 tumble on the transition from the ramp to the ground as the high friction face comes in contact with the edge.

Delving a little bit deeper into the implementation of the friction pyramid, we see that the x and y axis are indeed flipped. 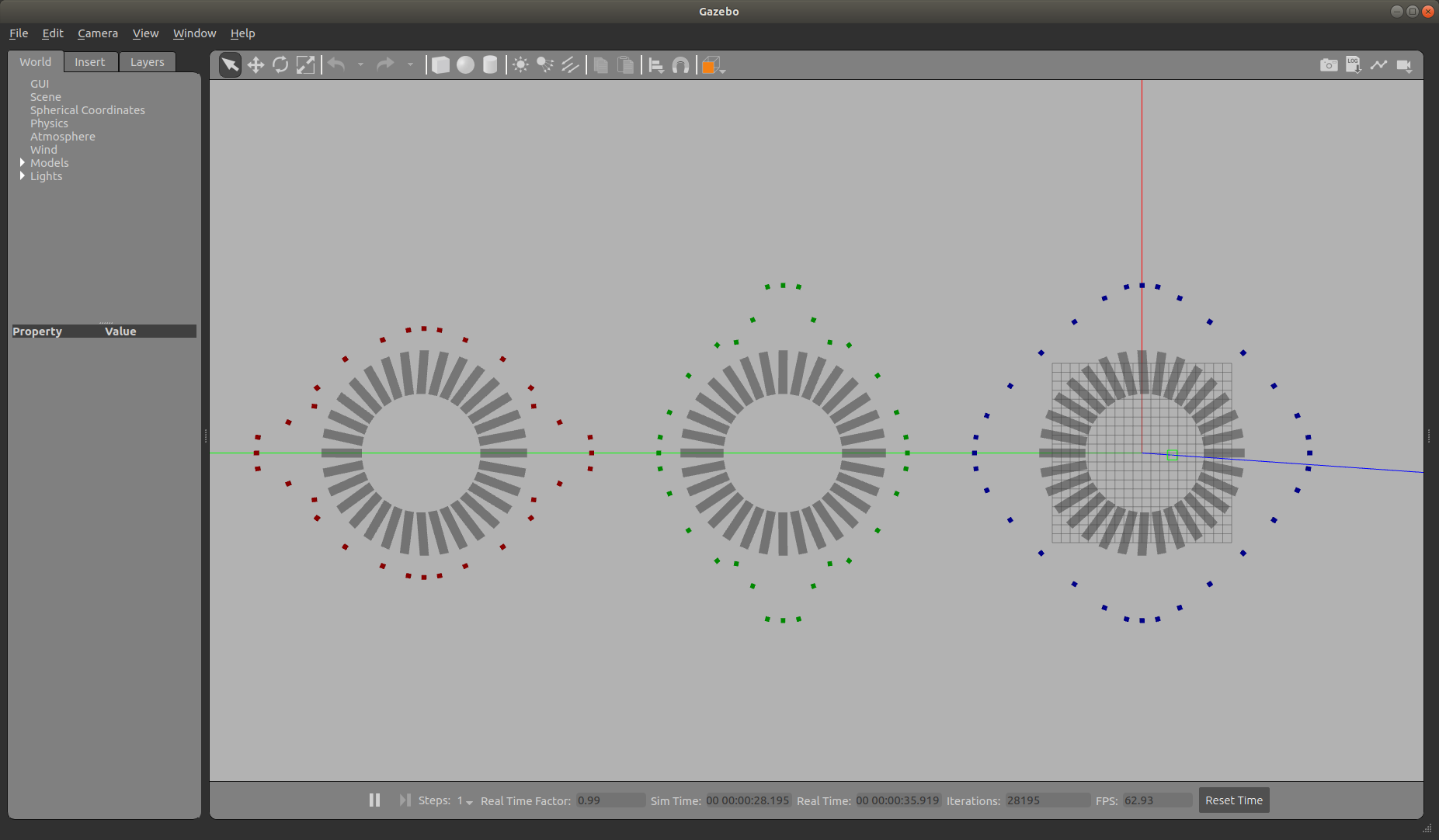 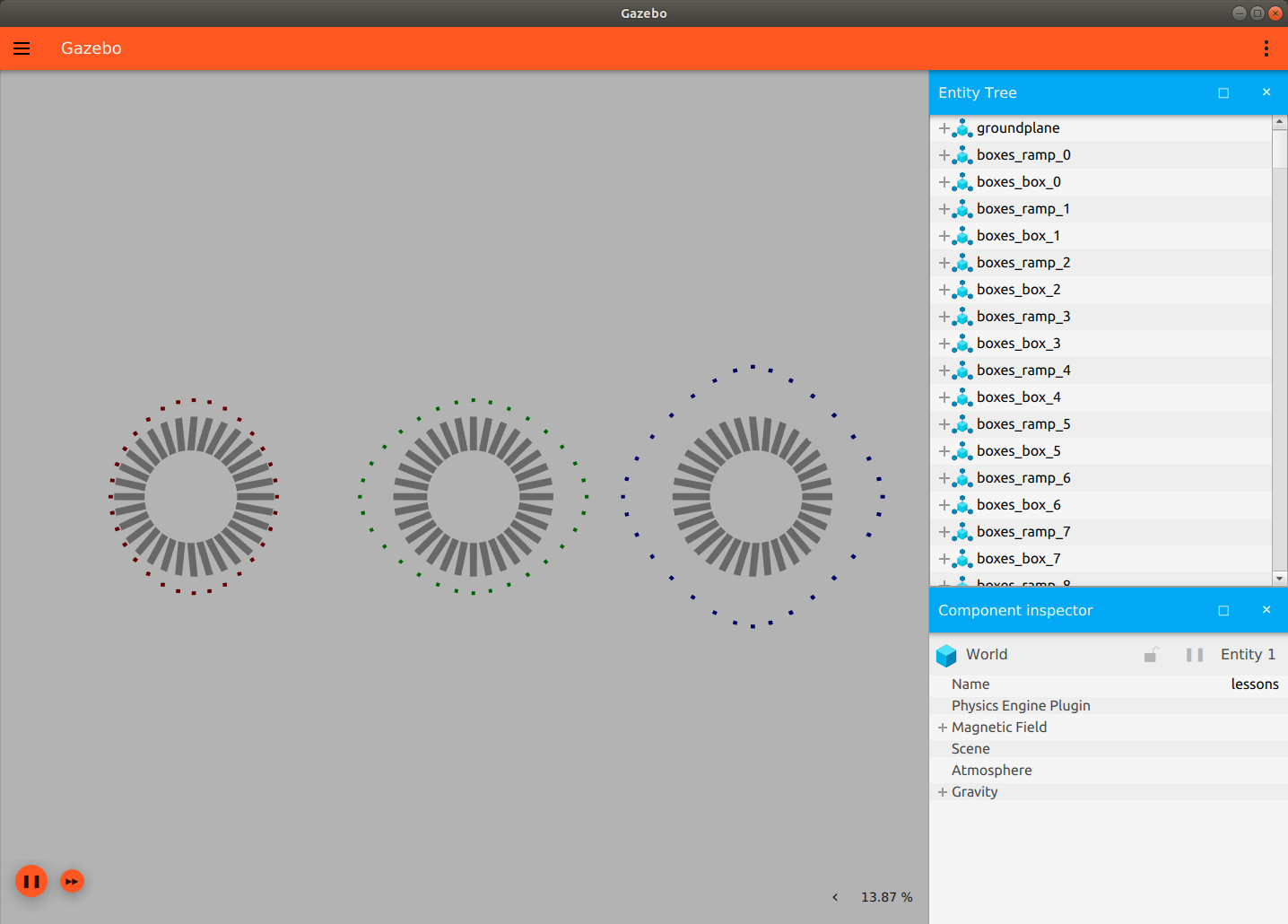 You can also clearly see better performance in the Ignition simulation of friction, with Ignition producing much smoother results.

Bounce is another area with a large difference between the two simulators. It is not currently modeled in Ignition, so if you require bounce Ignition is currently a no-go for you.

To model bounce in Gazebo you need to set 3 parameters in the SDF.

True infinite bounce is only achieved if the ground also has the restitution_coefficient set to 1. Note you can set the max_vel of the ground to 0 so it doesnât accrue any velocity.

Both joint damping and joint friction behave similarly in both versions.

Joint damping is modeled as viscous damping in units of N*m*s/rad, or the amount of opposing force to any joint velocity (in this case torque per angular velocity) that is used to âslowâ a moving joint towards rest.

Joint friction is modeled as kinetic friction with the coefficient of friction that is used to oppose the velocity of a joint to âslowâ a moving joint to rest.

I thought it would be good to also model these properties on a wheel, since that is a common use case.

From front to back: Yellow: none, Turquoise: damping, Pink: friction, Green: spring reference/stiffness.

Your use case will likely determine which version you end up going for. Overall Ignition has some nicer friction properties, but is lacking in some (perhaps less often used) areas such as bounce.

If you have simple simulation needs and want to stay on top of the latest versions, Ignition is probably the right call. Otherwise, youâre probably better off staying with Gazebo, at least for now.